Heropreneurs works with and provides mentoring to former members of the Armed Forces, helping them achieve their business goals and ideas. Backed by successful entrepreneurs, business leaders, politicians and Armed Forces veterans from all ranks, the UK charity celebrates the achievements, dedication and passion for business of our country’s brave men and women. Heropreneurs has received many awards including the Points of Light award, recognised as an inspirational organisation by UK Prime Minister Theresa May. 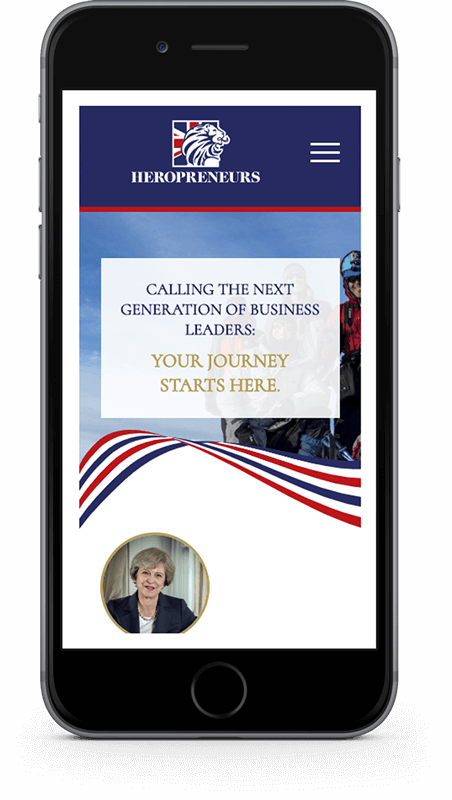 Blaze Concepts has been lucky to work with Heropreneurs for over 4 years and in that time has assisted with multiple brand and website redesigns.

The most recent website redesign came in light of their 2018 Heropreneurs Awards in November 2018, celebrating the success and entrepreneurial spirit of ex-members of the Armed Forces. The event was to held in London, presented by a judging panel of famous names including Dragon’s Den Deborah Meaden, General Sir John McColl KCB, CBE, DSO, Major General Andrew Pringle and Paddy Ashdown.

In preparation for the Awards, new branding was commissioned which consisted of four main colours; blue, red, white and gold. These colours had been chosen to reflect the work of Heropreneurs as heroic, enthusiastic and noble, as well as giving it a contemporary twist of British heritage. Blaze Concepts’ job as web designers and developers was to bring that message to the screen so more people can learn about the charity. As well as this, there needed to be multiple online forms for people to submit their nominations, an ecommerce store for attendees to purchase tickets for the event, and a dedicated Awards Information area for people learn more about the event and the judges.

In addition to the new Awards section, the design of the entire website needed changing. The layout and page structure remained the same in most parts, so our ideas focused solely on the content and how it needed to flow on the pages. We made use of the ribbon effect for page and footer dividers to keep scrolling smooth. We added in a marble background effect to break up the white space in large sections of content, plus keeping with the contemporary twist, we also added a thick white border around the browser window wrapping the web page.

Heropreneurs is now preparing for the 2019 Awards and nominations will be open from April. Head over to their website now for more information and for highlights of last year’s Awards.

This site uses cookies. By continuing to browse the site, you are agreeing to our use of cookies.

We may request cookies to be set on your device. We use cookies to let us know when you visit our websites, how you interact with us, to enrich your user experience, and to customize your relationship with our website.

Click on the different category headings to find out more. You can also change some of your preferences. Note that blocking some types of cookies may impact your experience on our websites and the services we are able to offer.

These cookies are strictly necessary to provide you with services available through our website and to use some of its features.

Because these cookies are strictly necessary to deliver the website, refuseing them will have impact how our site functions. You always can block or delete cookies by changing your browser settings and force blocking all cookies on this website. But this will always prompt you to accept/refuse cookies when revisiting our site.

We fully respect if you want to refuse cookies but to avoid asking you again and again kindly allow us to store a cookie for that. You are free to opt out any time or opt in for other cookies to get a better experience. If you refuse cookies we will remove all set cookies in our domain.

We provide you with a list of stored cookies on your computer in our domain so you can check what we stored. Due to security reasons we are not able to show or modify cookies from other domains. You can check these in your browser security settings.

We also use different external services like Google Webfonts, Google Maps, and external Video providers. Since these providers may collect personal data like your IP address we allow you to block them here. Please be aware that this might heavily reduce the functionality and appearance of our site. Changes will take effect once you reload the page.